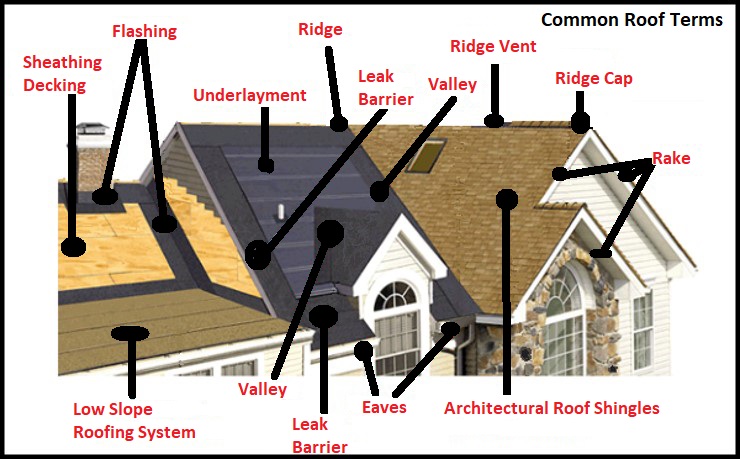 There are many roofing terms used in the industry however, they can be confusing to many homeowners. We have compiled a list of the most common roofing terms for reference to help you the homeowner better understand the makeup of a roof. This list may also help you better communicate with a roofing contractor. If at any time are not sure of a term or are not sure of something Metropolitan Design/Build is referring to please ask. We are always happy to answer any questions you may have regarding your roof project.

Attic:
The open space between the underside of the roof sheathing and the upper side of the ceiling directly below the roof.

Base Flashing:
The portion of the flashing which is attached to, or rest on the roof deck.

Blind Nailing:
Nails driven in such a way that the heads are concealed by succeeding layers of roofing materials.

Blisters:
Bubbles that may appear on the surface of asphalt roofing after installation.

Bridging:
A method of re-roofing with larger-sized shingles.

Bundle:
A package of shingles.

Butt Edge:
The lower edge of the shingle tabs.

Caulk:
To fill a joint with mastic or asphalt cement to prevent leaks.

Chalk Line:
A line made on the roof by snapping a taut string or cord dusted with chalk. Used for alignment purposes.

Class “A”:
The highest fire-resistance rating for roofing as per ASTM E 108 or ULC S107. Indicates roofing is able to withstand severe exposure to fire originating from sources outside the building.

Class “B”:
Fire-resistance rating that indicates roofing materials are able to withstand moderate exposure to fire originating from sources outside the building.

Class “C”:
Fire-resistance rating that indicates roofing material is able to withstand light exposure to fire originating from sources outside the building.

Coating:
A layer of viscous asphalt applied to the base material into which granules or other surfacing is embedded.

Collar:
Pre-formed flange placed over a vent pipe to seal the roof around the vent pipe opening. Also called a vent sleeve or pipe collar.

Concealed Nail Method:
Application of roll roofing in which all nails are driven into the underlying course of roofing, and covered by a cemented, overlapped course. Nails are not exposed to the weather.

Condensation:
The change of water from vapor to liquid when warm, moisture-laden air comes in contact with a cold surface.

Counter Flashing:
That portion of the flashing attached to a vertical surface to prevent water from migrating behind the base flashing.

Course:
A row of shingles or roll roofing running the length of the roof.

Coverage:
Amount of weather protection provided by the roofing material. It depends on the number of layers of material between the exposed surface of the roofing and the deck; i.e., single coverage, double coverage, etc.

Cricket:
A peaked saddle construction at the back of a chimney to prevent the accumulation of snow and ice, and to deflect water around the chimney.

Deck:
The wooden surface installed over the supporting framing members, to which the roofing is applied.

Dormer:
A framed window unit projecting through the sloping plane of a roof.

Double Coverage:
Application of asphalt roofing such that the lapped portion is at least 2″ (50 mm) wider than the exposed portion, resulting in two layers of roofing material attached to the deck.

Downspout:
A pipe for draining water from roof gutters. Also called a leader.

Drip Edge:
A non-corrosive, non-staining material used along the eaves and rakes to allow water run-off to drip clear of underlying construction.

Eaves:
The horizontal, lower edge of a sloped roof.

Edging Strips:
Boards nailed along eaves and rakes (after cutting back existing wood shingles) to provide secure edges for re-roofing with asphalt shingles.

Exposed Nail Method:
Application of roll roofing in which all nails are driven into the cemented, overlapping course of roofing. Nails are exposed to the weather.

Exposure:
That portion of the roofing exposed to the weather after installation. For example, the exposure of typical roof shingle is 149 mm (5-7/8”).

Exposure I Grade Plywood:
Type of plywood approved by the American Plywood Association for exterior use.

Felt:
Fibrous material saturated with asphalt and used as an underlayment or sheathing paper, such as IKO’s AM #15 Asphalt Felt.

Flashing:
Pieces of metal or roll roofing used to prevent seepage of water into a building around any intersection or projection in a roof such as vent pipes, chimneys, adjoining walls, dormers, and valleys. Galvanized metal flashing should be a minimum of 28-gauge.

Gable:
The upper portion of a sidewall that comes to a triangular point at the ridge of a sloping roof.

Gable Roof:
A type of roof containing sloping planes of the same pitch on each side of the ridge. It contains a gable at each end.

Gambrel Roof:
A type of roof containing two sloping planes of different pitches on each side of the ridge. The lower plane has a steeper slope than the upper. It contains a gable at each end.

Granules:
Ceramic-coated colored crushed rock that is applied to the exposed surface of asphalt roofing products.

Gutter:
The trough that channels water from the eaves to the downspout.

Headlap:
Shortest distance from the butt edge of an overlapping shingle to the upper edge of a shingle in the second course below. The triple coverage portion of the top lap of strip shingles.

Hip:
The inclined external angle formed by the intersection of two sloping roof planes. Runs from the ridge to the eaves.

Hip Roof:
A type of roof containing sloping planes of the same pitch on each of four sides. It contains no gables.

Ice Dam:
Condition formed at the lower roof edge by the thawing and re-freezing of melted snow on the overhang. Can force water up and under shingles, causing leaks.

Lap:
To cover the surface of one shingle or roll with another.

Mansard Roof:
A type of roof containing two sloping planes of different pitch on each of four sides. The lower plane has a much steeper pitch than the upper, often approaching vertical. It contains no gables.

Nesting:
A method of re-roofing with new asphalt shingles over old shingles in which the top edge of the new shingle is butted against the bottom edge of the existing shingle tab.

No-cutout shingles:
Shingles consisting of a single, solid tab with no cutouts.

Non-veneer panel:
Any wood-based panel that does not contain veneer and carries an APA span rating such as water board or oriented strand board.

Open Valley:
Method of valley construction in which shingles on both sides of the valley are trimmed along a chalk line snapped on each side of the valley. Shingles do not extend across the valley. Valley flashing is exposed.

Overhang:
That portion of the roof structure that extends beyond the exterior walls of a building.

Rake:
The inclined edge of a sloped roof over a wall.

Rafter:
The supporting framing member immediately beneath the deck, sloping from the ridge to the wall plate.

Release Tape:
A plastic film strip that is applied to the back of self-sealing shingles. This strip prevents the shingles from sticking together in the bundles only and does not need to be removed for application.

Ridge vent:
A ridge vent is a type of vent installed at the peak of a sloped roof which allows warm, humid air to escape a buildings attic.

Rise:
The vertical distance from the eaves line to the ridge.

Run:
The horizontal distance from the eaves to a point directly under the ridge. One half the span.

Self-Sealing Strip or Spot:
Factory-applied adhesive that bonds shingle courses together when exposed to the heat of the sun after application. Usually on the underside of a single.

Shading:
Slight differences in shingle color that may occur as a result of normal manufacturing operations.

Soffit:
The finished underside of the eaves, which should contain holes or perforations to provide air intake for attic ventilation.

Starter Strip:
Asphalt roofing applied at the eaves that provide protection by filling in the spaces under the cutouts and joints of the first course of shingles. IKO’s Leading Edge Plus is a pre-made starter strip product ideally suited for this application.

Square:
A square is a common measurement for a roof area. One square is equivalent to 100 square feet (10 by 10 feet).

Tab:
The exposed portion of strip shingles defined by cut-outs

Telegraphing:
A shingle distortion that may arise when a new roof is applied over an uneven surface.

Top Lap:
The portion of the roofing covered by the succeeding course after installation.

Valley:
The internal angle formed by the intersection of two sloping roof planes.
Vent:
Any outlet for air that protrudes through the roof deck such as a pipe or stack. Any device installed on the roof, gable or soffit for the purpose of ventilating the underside of the roof deck.

Vapor retarder:
Any material used to prevent the passage of water vapor.

Waterproof underlayment:
A water resistant or waterproof barrier material that is installed directly onto the rood deck. It is applied under all other roofing materials as an added layer of protection from severe weather.

Woven Valley:
Method of valley construction in which shingles from both sides of the valley extend across the valley and are woven together by overlapping alternate courses as they are applied. The valley flashing is not exposed.

To schedule an estimate and/or site visit, please provide us with the following details. 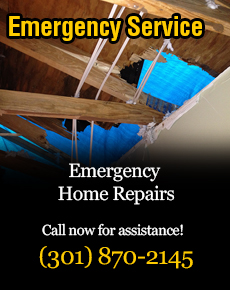 Metropolitan Design/Build is a home improvement contractor with over 32 years of experience. We serve clients in Maryland, Washington, DC and Northen Virginia. We are committed to total quality for every project! We are licensed, bonded and insured in Maryland, DC & Virginia: MHIC#: 28162 Virginia #: 2705039332-A District of Columbia #: 420212400040